They’ve been in Australia for a matter of days.   But the Geordie Shore haven’t wasted any time getting themselves down to the beach to soak up the sunshine Down Under.   Holly Hagan led the way for her castmates, showing off her bikini bod in a turquoise bikini top and denim shorts as made her way across the sands. 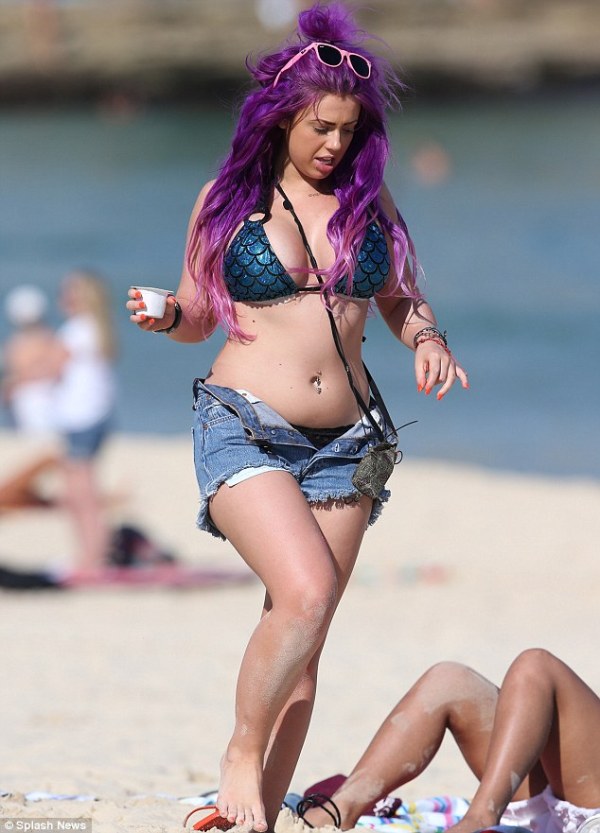 And as well as showcasing her feminine curves in the swimwear, Holly used the opportunity to display her newly-dyed purple hair.   The shade is in sharp contrast to the bright red colour Holly became famous for, but the 20-year-old star said that she just fancied a change.   Holly said of her new look: ‘I had the red hair for two years and it had a lot of memories in it – there were so many secrets in that hair.

‘I think it’s just nice to have a change – it’s bright, it’s fun – it’s the new Holly.’   And Holly certainly appears to be embracing her new look, wearing her purple locks half tied up on top of her head as she enjoyed the day at the beach.   She was joined by her castmate Sophie Kasaei, who opted for a white triangle bikini top and low-slung white ripped shorts, with a floral pocket detail.

Sophie looked somewhat sombre as she laid out her Minnie Mouse towel on the sand in preparation for a long sunbathing session.   Prior to arriving Down Under, Sophie had said she was concerned that her relationship with on-off boyfriend Joel Corry may not survive for the six weeks she is out there for.   She said: ‘It does worry me being away for so long. I will be gone for six weeks, and I know how hard that is going to be for my relationship. Will he come over and if he doesn’t will I be able to trust him as much before?

‘I just don’t know, I am really scared to be honest. It’s all real, so there’ s no way of knowing what is going to happen, there is no script, it’s real life.’

But whatever happens with her relationship, Sophie can be safe in the knowledge that her girlfriends will always stand by her.   She was seen chatting to her fellow Geordie girls including Vicky Pattison, who kept covered up in the sun wearing a black anchor-print vest top and shorts.   Despite an absence from the group from the first few days of their Australia trip, Charlotte Letitia-Crosby joined the cast for the day at the beach, looking thrilled to be back with her pals.

Another familiar face to make a return – much to the delight of fans – is Jay Gardner, who has decided to rejoin the show for the sixth season. 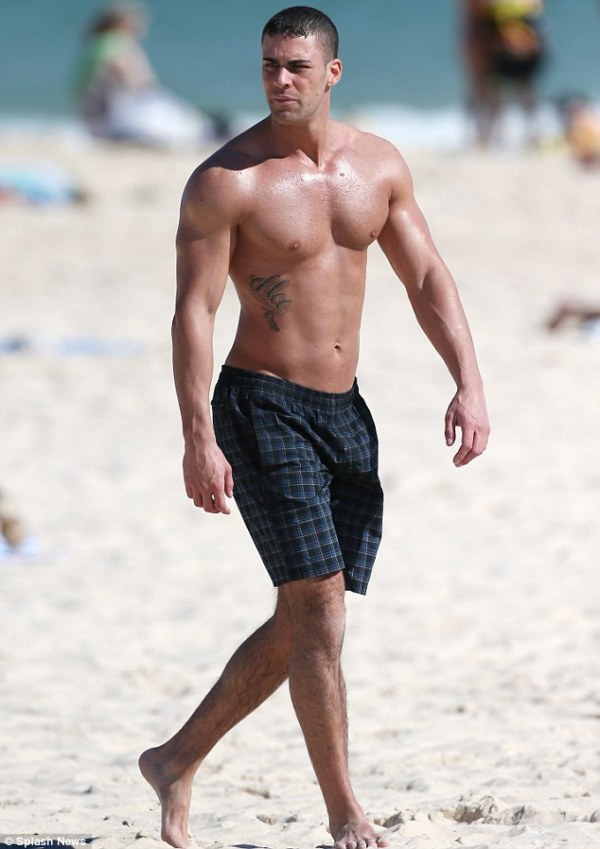 Jay’s return follows the departure of Vicky’s ex-fiancé Ricci Guarnaccio and Dan Thomas from the show.   But now Jay, who left the show at the end of the third series, is back – and looking more buff than ever, judging by his sculpted body in black swimming shorts on the beach.

Speaking of his return to the show, Jay said: ‘I can’t wait to catch up with the lad’s in Australia, especially my mate Gaz, and see what this Scotty guy is really all about! Will be great catching up with the girls in the house too, I just hope that there’s less drama this time than Cancun!’

Jay’s bromance buddy Gary ‘Gaz’ Beadle was giving him some strong competition in the muscular stakes, showing off his frame in a pair of blue swimming shorts.   Gary certainly appeared to be enjoying himself, and raised his arms out to the side while closing his eyes and soaking up the sunshine, as James Tindale also went for a Baywatch-type slow stroll through the water.

Going for something slightly more active later in the day, Gary covered up his torso in a T-shirt as he paddleboarded in the sea.

Scott Timlin also went for an active approach during the day out, doing handstands and somersaults – much to the delight of his fellow beach-goers. 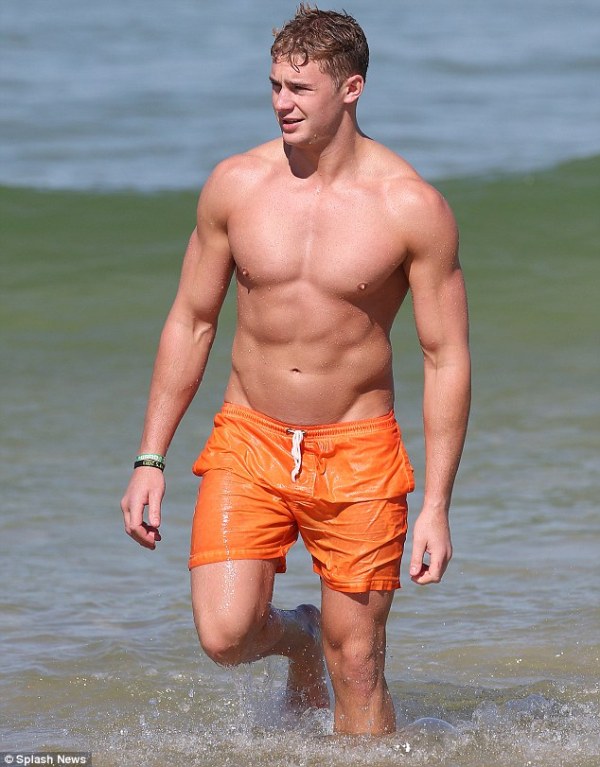 The cast of Geordie Shore settle in to life Down Under!

To some they may have the dream job and to others it’s their idea of hell. But the cast of Geordie Shore don’t seem to be doing too badly at the moment.

The party loving reality stars are settling into life in sunny Australia while preparing to film series six
of their hit MTV show in the Country. Cast members Scott Timlin , Charlotte Letitia Crosby , Vicky Pattinson and James Tinsdale were enjoying the warm weather on Sydney’s Bondi Beach this Week.
The group were on their best behaviour for their professional duties and posed for  promotional shots
with an Mtv and Geordie shore branded surf board by the sea.

And not one to waste an opportunity for fun , Scoot soon stripped off to show his toned
torso and dived into the sea to have a splash around with some friends.

Meanwhile , Vicky opted for some summer style and wore a red maxi dress with a light brown floral pattern while wearing a pair of brown wedge heels on her feet.

Fellow Geordie shore star Charlotte decided on a while blouse and brown skirt and stuck with the beach
theme by choosing to wear a pair of black sandals.

And Charlotte appeared to enjoy her day at work and tweeted her excitement at letting loose
on a night out later that evening.

Charlotte recently told MTV ‘Filing down under is going to be amazing! just like filming in Newcastle
but with a constant tan and a load of shrimps!’ 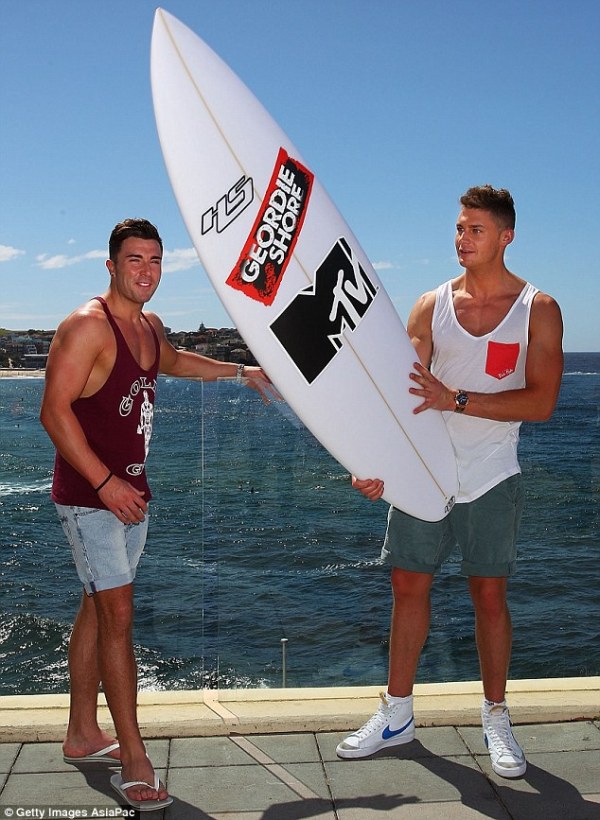