It’s been quite a year for Katie Holmes, it was only last June that she shocked the world  (and her then husband Tom Cruise) by announcing she wanted a divorce.

Since then, the emancipation of Katie has been swift and we’ve seen her go from cossetted  movie star wife to working single mother.

Now, prepare to view Katie, 34, like you never have before… laid almost completely bare for a new high end jewellery campaign.

Katie is the face of H.Stern’s Iris collection, which is inspired by the sea, and in the  latest shots released from the campaign she is semi-naked on a beach with scudding clouds  forming the backdrop.

n one shot she can be seen slipping her bra off, and in the next it’s gone leaving the  stunning star to cover her breasts with her arms.

Another shot sees Katie lying on the sand wearing a bikini, and of course, the jewellery.

She was just 14 when she enrolled in a local modelling school in her hometown of Toledo, Ohio.

Back then Holmes could hardly have imagined that today she would be the star of global advertising campaign – let alone that she would be a famous actress.

In taking on the role at the jewellery house, Katie follows in the footsteps of former H.Stern  faces Kate Moss and Catherine Deneuve, it’s her third campaign with the house that is set to open a London store on Sloane Street next week.

In another shot, Katie looks seductively into the camera as her long brown hair blows out  around her.   Mother-of-one Katie is seen writhing around in the sand, advertising a pretty chain bracelet.   Katie is also seen displaying her stunning figure in a sexy black one-piece, going for the wet  look with her hair slicked back to show off her model-like bone structure. 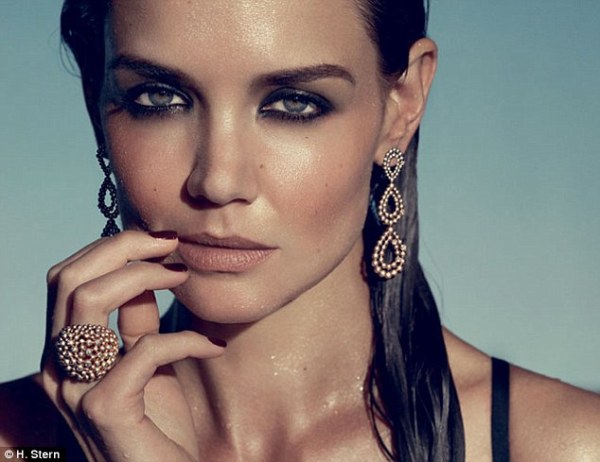