It seems that every celebrity in Hollywood has a perfume to their name.   But Selena Gomez has found that lending one’s name to a bottle of fragrance isn’t always the easy route. The 20-year-old teen star is counter-suing fragrance company Adrenalina, which is accusing her of backing out of a multi-million dollar endorsement deal.

The Come And Get It singer claims the defunct perfume makers actually owe her at least 5.2million because their business deal fell apart.   A source told gossip website TMZ that Selena has filed a countersuit against the company claiming she only backed out because Adrenalina was going broke and couldn’t afford to manufacture or market her perfume line.   The company filed a lawsuit against the brunette beauty last month for breaking a contract to be a spokesperson for the brand.   According to court documents filed by her attorney Michael Weinsten, Adrenalina promised to pay the Spring Breakers star 5per cent royalty on sales of all Selena-brand scents, and guaranteed her minimum earnings of $5.2million.

Her legal team insists Selena only terminated her contract with the company to protect her reputation after she discovered it could barely afford to pay its own employees.   Mr Weinsten previously said their lawsuit was without merit, adding: ‘Any claim that Selena did not meet her promotional obligations is ridiculous, manufactured after Adrenalina was terminated.    ‘Selena will vigorously defend this lawsuit, and will soon bring her own lawsuit against Adrenalina for millions in damages.’

Vanessa Hudgens turned herself into a walking advertisement for Pilates on Thursday.

The Spring Breakers star showed of her flawless physique as she went to the exercise class  in Los Angles, California.   The 24-year-old has clearly been hitting the strengthening and toning class regularly as the  she was able to show off perfectly defined legs – which did not have a hint of cellulite. 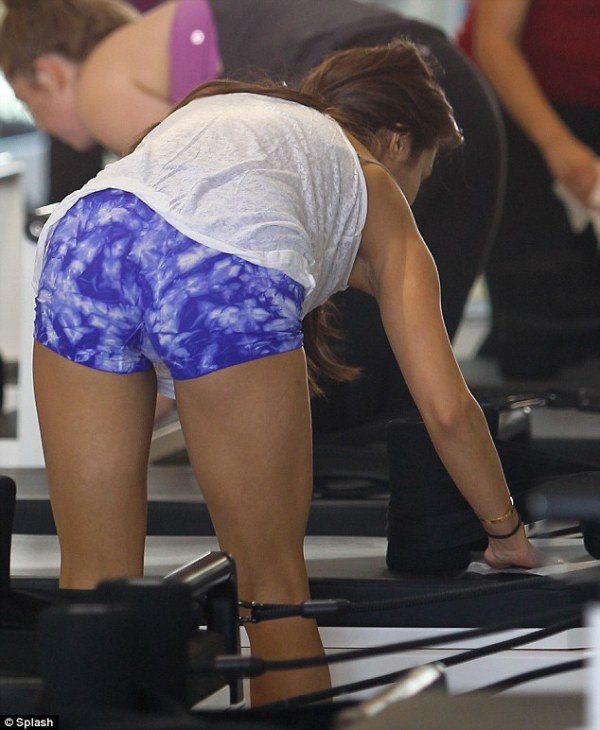 Obviously the High School Musical star is proud of her hard work as she wore tiny purple tie-dyed booty shorts for the grueling class.   The actress added a white tank to her workout look highlighting her tanned skin.   On the the way into her class Vanessa covered up a bit more – except still kept her toned  legs on display –  wearing a grunge-inspired flannelette shirt with comfy ugg boots.

Bending over to set up her Pilates reformer, Vanessa showed exactly what she has been working  on.

hile the other women in her class chatted and slowly set up, Vanessa was ready and rearing to go immediately jumping on the reformer and stretching.   The star has previously spoken about her need to do Pilates thanks to a chocolate addiction.

She told Self magazine she hits the gym at least four times a week, combining cardio on machines with spin classes and Pilates.   She said to Self: ‘My secret to flat abs is Pilates.

‘I like sitting in the front row of cycling class. I feel like everybody behind me is looking forward, and that pushes me to do my best.

‘I look at myself in the mirror and get this really ferocious, angry look on my face like I’m  about to kill someone. It’s crazy.’   The brunette beauty is certainly very dedicated to her working out regime as she went to the class just hours before she had to get ready for the Los Angeles premiere of her new movie, Spring Breakers, on Thursday night.

The 24-year-old joins Selena Gomez and Ashley Benson to play friends who commit a robbery to  fund their Spring Break.

The film sees Vanessa spend a fair share of her time in her bikini – so luckily she has put  in the hours at Pilates.   Spring Breakers – which also stars James Franco – is already getting rave reviews, however most of the praise is reserved for James than his female co-stars.   While technically the gritty independent flick was released last year at Cannes Film Festival,  American moviegoers will get a chance to see Selena, Vanessa and Ashley turn into very bad girls on March 22.