Cacee Cobb celebrated her baby shower with her pregnant best friend, Jessica Simpson on Sunday.  The friends and family gathered for Cobb’s shower at the Four Seasons Beverly Hills.

“Showered with so much love yesterday,” Cobb, 35, who is expecting her first child with husband Donald Faison in August, tweeted on June 3. “Thank you, Jessica Simpson. Best friends. Best baby shower ever.”

Jessica Simpson’s maternity style   Cobb shared a picture from the party of herself posing with Simpson, who is expecting her second child with fiance Eric Johnson in July. The pregnant pals showed off their growing baby bumps for the camera in front of a dining table decorated in black, white and yellow. Cobb wore a long blue floral dress, and Simpson styled a shorter, curve-hugging black dress.   The two ladies left the party together, with Simpson driving. “She said she had to drive because she gets nauseous easily,” Source tells Us.

Cobb and Faison, 38, tied the knot in December 2012, and their gorgeous vintage-themed wedding photos are featured in the summer issue of Martha Stewart Weddings.

Zoe Saladana’s summer love is just heating up! Less than two weeks after the actress was spotted making out with artist Marco Perego at Star Trek into the Darkness’ Hollywood premiere afterparty.

The 34 year old packed on the PDA with her new beau in his native Italy on Monday. Wearing an all-denim look, the sexy star shared a passionate kiss with the former professional soccer player. “They have an attraction,” a source Says  “Marco is happy to be hanging out with her.”

Her signature style appeared to be muted tones and modest necklines but it seems that Victoria Beckham has undergone a fashion transformation of late. The 39-year-old fashion designer stepped out in New York on Thursday in a blouse that revealed her chest and a bright purple skirt.

Victoria showed off her modest cleavage in the sepia coloured blouse, from her label, boasting black cuffs and a collar. The revealing top meant that Victoria was unable to wear a bra and was in danger of flashing her modesty.

She teamed the top with a vibrant skirt, also from her own collection, showing off a slit up to the mid-section of her thigh.

The mother-of-four finished off her look with a pair of thin rimmed aviator sunglasses. Her flurry of colour comes just a day after Victoria arrived into the Big Apple, wearing a pair of bright orange trousers.

Victoria strutted through the airport in a pair of extremely long orange trousers which swamped her tiny frame.   The former Spice Girl teamed the bright pantaloons perfectly with a long black coat and a crisp white blouse.   She also accessorised the outfit well with a pair of rather high platform wedges and hid her eyes behind large sunglasses.

Traveling light Victoria carried no luggage with her as she teetered through the airport without her usual main accessory on her arm, daughter Harper.   Victoria has had a busy few weeks globe trotting between her London home and Paris, where husband David plays.   the Spice Girls have axed plans to go on tour in 2014 because Victoria reportedly refused to join them.

The group had reportedly been ‘plotting’ a string of huge final farewell shows next year, but after Victoria refused to take part, the remaining band members – Geri Halliwell, Mel B, Mel C, and Emma Bunton – decided to scrap their plans following discussions last week amid concerns ticket and merchandise sales would struggle if the entire quintet weren’t involved.   ‘Led by Geri, the girls had been plotting a world tour as a four-piece band, culminating in a final night at Wembley Stadium.

For four years they have played on screen companions in the supernatural hit television show The Vampire Diaries.   But Nina Dobrev and Ian Somerhalder have reportedly called time on their real-life romance after three years of dating.   The good looking co-stars, who appear in the CW series as Elena Gilbert and Damon Salvatore, are said to have decided to call it quits, but have vowed to continue working together as normal.

source told Us Weekly that the pair ‘will continue to work together and remain best friends, which is where the relationship started.’   Nina, 24, and Ian, 34, have reportedly promised to not let their personal relationship affect their onscreen chemistry and will remain ‘consummate professionals’.   But the actor seemed to make a slight dig at his former flame by posting a somewhat vague message on his Twitter page on Thursday, writing: ‘A THOUGHT FOR TODAY: People change and forget to tell each other. -Lillian Hellman, playwright (1905-1984).’

Last year, Dobrev revealed that she never wanted to date Somerhalder, but she simply couldn’t resist her feelings.

In an interview with Seventeen magazine the actress admitted: ‘Sometimes you can’t help who you have a connection with, and you can only fight it for so long.’   Dobrev added: ‘I didn’t want to be dating one of my costars – my goal on the show was to be professional.’ 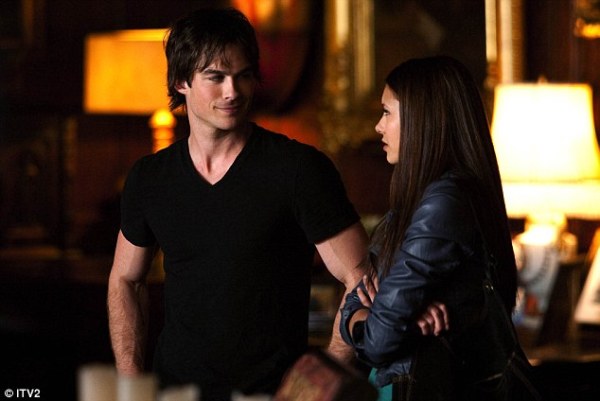 Despite their 10-year age difference, the dark haired stars began quietly dating in 2010 a year after the hit show started filming.   Nina needn’t worry about who she will spend her downtime with between shooting scenes, however, as the girls on the show are very close.   She told the magazine: ‘Girls weekend with the Vampire Diaries girls has become a big deal! It’s our quality time.   ‘We go to dinner or cook dinner together, watch movies, lie on the beach, and take tons of pictures.’

It seems that every celebrity in Hollywood has a perfume to their name.   But Selena Gomez has found that lending one’s name to a bottle of fragrance isn’t always the easy route. The 20-year-old teen star is counter-suing fragrance company Adrenalina, which is accusing her of backing out of a multi-million dollar endorsement deal.

The Come And Get It singer claims the defunct perfume makers actually owe her at least 5.2million because their business deal fell apart.   A source told gossip website TMZ that Selena has filed a countersuit against the company claiming she only backed out because Adrenalina was going broke and couldn’t afford to manufacture or market her perfume line.   The company filed a lawsuit against the brunette beauty last month for breaking a contract to be a spokesperson for the brand.   According to court documents filed by her attorney Michael Weinsten, Adrenalina promised to pay the Spring Breakers star 5per cent royalty on sales of all Selena-brand scents, and guaranteed her minimum earnings of $5.2million.

Her legal team insists Selena only terminated her contract with the company to protect her reputation after she discovered it could barely afford to pay its own employees.   Mr Weinsten previously said their lawsuit was without merit, adding: ‘Any claim that Selena did not meet her promotional obligations is ridiculous, manufactured after Adrenalina was terminated.    ‘Selena will vigorously defend this lawsuit, and will soon bring her own lawsuit against Adrenalina for millions in damages.’

The Biggest Loser star Jillian Michaels made the jump from being in a couple to family of four in just a week last year.   So it’s no wonder the personal trainer needs a bigger house to accommodate her growing family.   The brunette and partner Heidi Rhodes, who gave birth to son Phoenix a week before they adopted Lukensia from Haiti last spring, are selling their Hollywood Hills home for $2.45million. 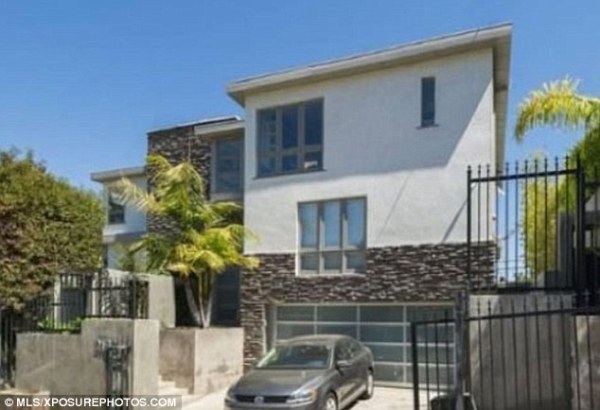 Jillian, 39, bought the three bedroom, four bathroom home in 2008 for $1.56milion.   She actually player a part in designing the home, which includes a master bedroom suite with walk-in closet and en-suite bathroom with tub and steam shower.

The house includes two further bedrooms – one for the children, with the second being used as an office.   The modern house is located in a gated community and includes incredible views of Los Angeles.   Last July, the couple were left shaken when the house was burgled in the middle of the night.

Thieves took her Bentley after finding the keys in the house.   Meanwhile, Jillian recently admitted she was finding it hard to juggle her job and parenting Phoenix and Lukensia.   She told Fitness magazine: ‘I get up at 7 am – after being up all night with the baby – and run around trying to get both kids diaper-changed, dressed and fed.

Zac Efron was in fine form.   The 25-year-old heartthrob set pulses racing as he strutted bare-chested with his shirt wide open while practicing his game on the Los Angeles set of Townies on Tuesday.   Zac, who plays a frat boy in the comedy, alternated between swinging a baseball bat and bouncing a basketball during what looked like rehearsals. 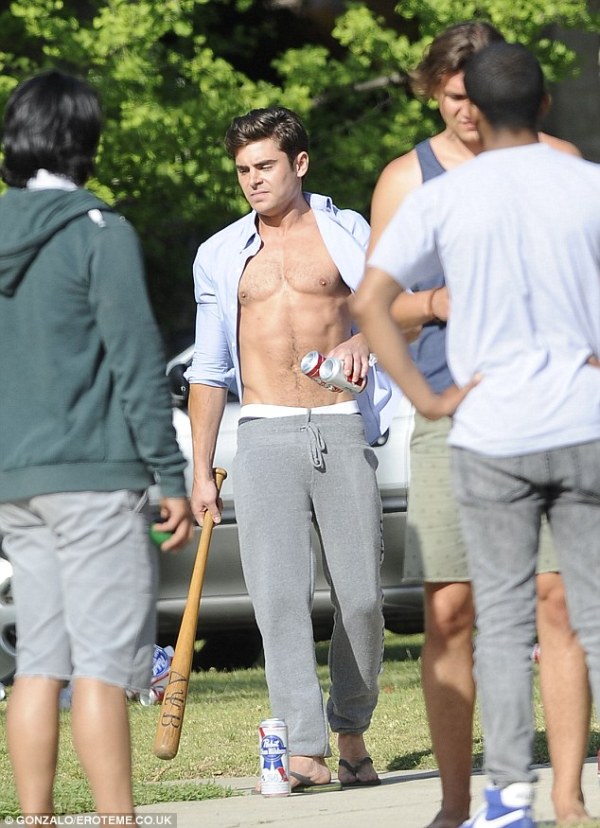 All eyes were not on the object in hand but on Zac’s sculpted chest and six-pack abs, which looked like a work of art in the sun.   Zac was getting ready to shoot a scene, sprinting around in flip flops – although sometimes barefoot – and grey track pants that were tugged down slightly to reveal his shorts underneath.   The young actor was surrounded by beer cans, which wasn’t surprising considering he plays a college boy whose antics affect the lives of his neighbours.

Zac broke his hand last month during a fight sequence with his co-star Dave Franco, but his injury seems to have healed nicely.   The blue-eyed star explained what happened during a recent appearance on Live With Kelly And Michael.   ‘I broke it a couple days ago on set during filming, it was during a stage fight with Dave Franco,’ Zac said at the time.

‘I had to go back to work so I couldn’t really wear a cast. So they [the medics] put like a titanium plate in it and a bunch of screws.   ‘I don’t know why I’m telling you this. My hand in theory is back to normal, it just looks really gross.’   The film also co-stars Rose Byrne, Seth Rogen and Lisa Kudrow.