Four years ago, Neverland lay in ruins after Michael Jackson’s death. The fairground rides were rusting away, all the staff had been dismissed and the grounds were left abandoned and destroyed. 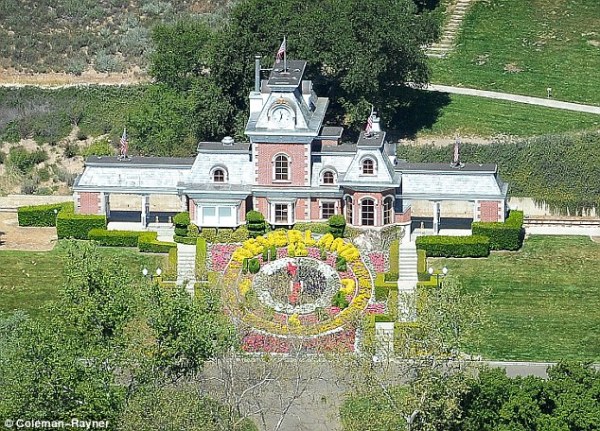 But, thanks to the efforts of Michael’s children, the huge 3,000-acre site is now well on the road to recovery.

According to sources close to the estate in Los Olivos, California, the rest of the family have taken very little interest in Neverland and not one person has visited it since the king of pop died in 2009 – apart from the kids Prince, 16, Paris, 15, and Blanket, 12. 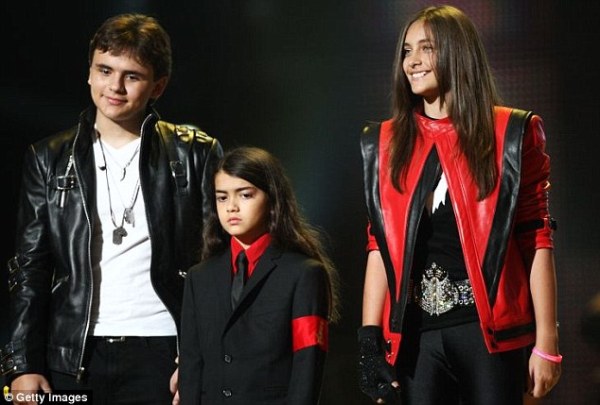 Paris spoke out earlier this month about her heartbreaking visit to Neverland two years ago to find it in ruins.

She is determined to rebuild it to its former glory so that underprivileged children can enjoy it.

The pictures prove that the children have won the battle of wills with the Jackson family, who all appear to have shown a complete disregard for Neverland and the wishes of Michael.

When we visited Neverland last week, we were told by household staff and security that Jacko’s siblings or parents have never bothered to visit the ranch since his death. 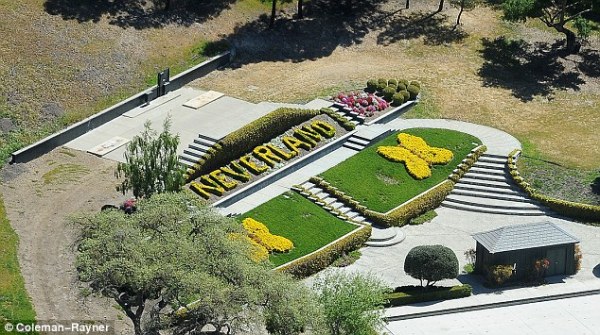 But they only had words of praise for the children, with one security guard saying: ‘Neverland has been completely revitalised. There’s a full set of staff and people in charge who care about the place.’

The photographs tell the real story of the ranch’s rejuvenation. The bright yellow flowers spelling Neverland have been restored next to the main house, but this time flowers-shaped in a butterfly have been added to one bed.

There’s also a new section in the gardens of an image of a boy in a moon, similar to Peter Pan – Michael Jackson and his children’s favourite fairytale character.

According to the wishes of the children, the bustling fairground has been replaced with a tranquil ‘Zen Garden’.

The Ferris wheel swings and other fairground rides have been removed, and expert h orticulturists have replaced them with a calm seating area surrounded by lush topiary carved into animal shapes, weeping willow, oak and fir trees, perennial shrubbery and manicured gardens. 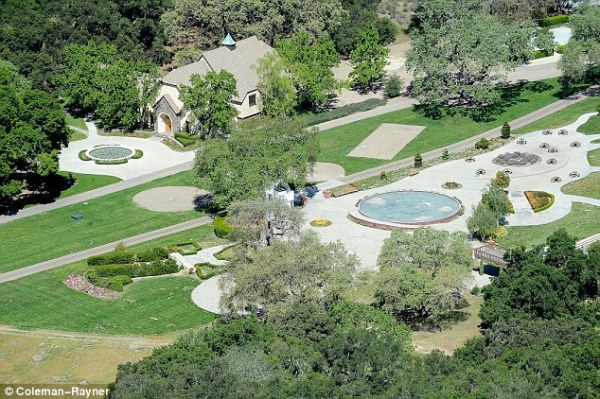 Once again, red tail kites, brown eagles and turkey buzzards are nesting in the grounds and grassland, which are irrigated and mowed daily.

The fountains and pool has been filled with water again and the tennis and basketball courts are restored to their previous states.

Our source says: ‘Neverland has never looked better. More staff have been employed – they’ve got full-time gardeners, household staff, proper security and people are now looking after the house like it should have always been when Michael was alive. 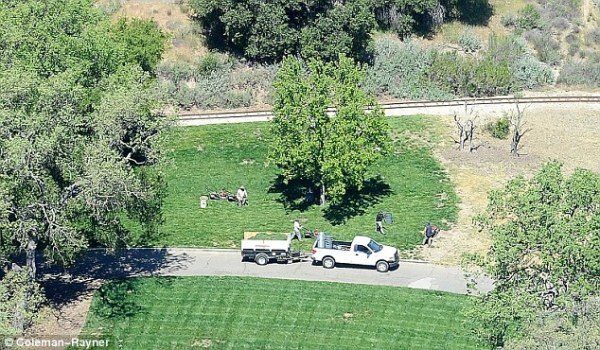 ‘We’re lucky that the children are level-headed and want it to be a fitting tribute to their dad and also do some good in the world.’   Prince, Paris and Blanket still have a substantial investment in Neverland, which is co-owned by the Sycamore Valley Ranch Company, who paid off nearly $25 million of Michael’s mortgage debt in 2008.

Colony Capital, who own Sycamore Valley Ranch company, refused to comment when asked the revamp of Neverland. 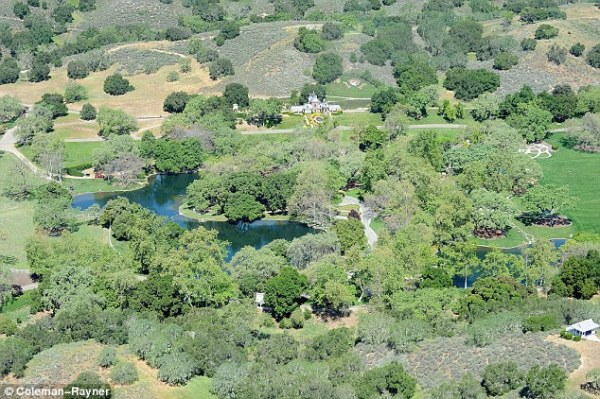 They looked close when they reunited earlier this month to celebrate Paris Jackson’s 15th birthday.   And it seems it wasn’t a one-off occasion, as Debbie Rowe and her daughter were spotted enjoying quality time together once again as they headed to lunch together in California on Sunday.   The pair showed they are serious about forging a real relationship with each other for the first time since Debbie signed away all parental rights to her late father Michael Jackson in 2011. 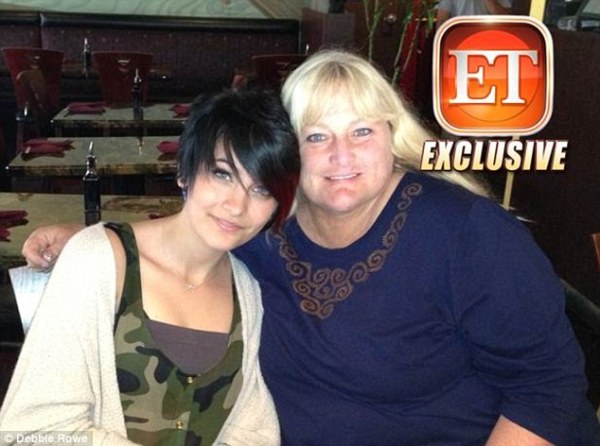 Dressed in a pair of cut-off denim shorts, with Dr. Marten boots and a camouflage jacket, the young girl flashed the rock sign and a smile to waiting photographers.   Completing her edgy look she wore a Kurt Cobain T-shirt, while her cropped hair fell over her eyes.

While her mother may not have the same rock chic style, simply opting for a pair of jeans and T-shirt, she too looked comfortable and at ease.

And as Debbie hopped into her car, Paris jumped into the passenger seat next to her showing that despite her rather unconventional upbringing she’s still an average teenage girl.

No doubt the pair still have plenty to catch up on as they have only been in touch following Michael’s tragic passing in 2009.   The lunch trip comes just a few days after the first picture of the pair together surfaced.

The touching image shows Debbie with her arm around Paris as they celebrated the teenager’s 15th birthday at, according to Entertainment Tonight, Ahi Sushi in Studio City, California on April 3.   Paris appeared serene and content as she leaned in close to her mother, a dermatologist’s nurse, who looked thrilled to be included in her daughter’s birthday celebration. 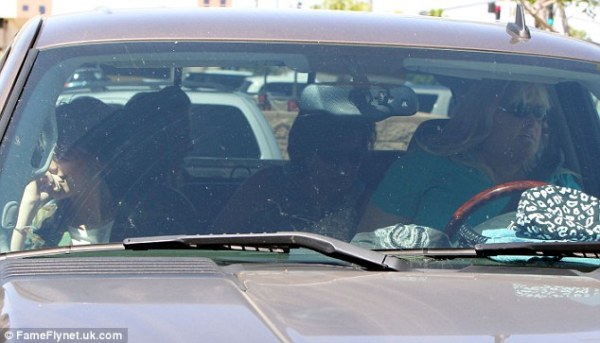 Again Paris – the youngest of Michael and Debbie’s two children – showed off her edgy style by wearing her short dark hair swept across her forehead and highlighting her eyes with thick black liner.

Paris said: ‘When I’m with my mom, we don’t really have security with us. Which is really nice.

Debbie and Michael met when he was a patient at the specialist skin clinic she worked at when he was being treated for his chronic vitiligo.

The pair were married between 1996 and 1999, and Debbie gave full custody of her two children with Michael, Prince and Paris, during their divorce proceedings in 1999. 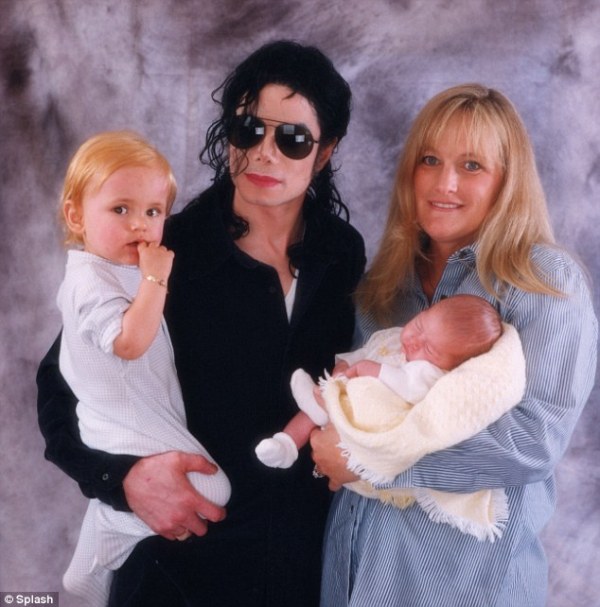 She later took things one step further in 2001, and relinquished all parental rights to the children, who were just toddlers at the time.

However, after the singer’s death in June 2009, Debbie, 54, reached an agreement with Michael’s mother – who became the children’s’ legal guardian – for supervised visitation rights.

It’s a fact of life that sometimes parents don’t approve of their offspring’s choice of partners. And it seems like Clinton Brown is less than keen on his son Chris’ girlfriend Rihanna. 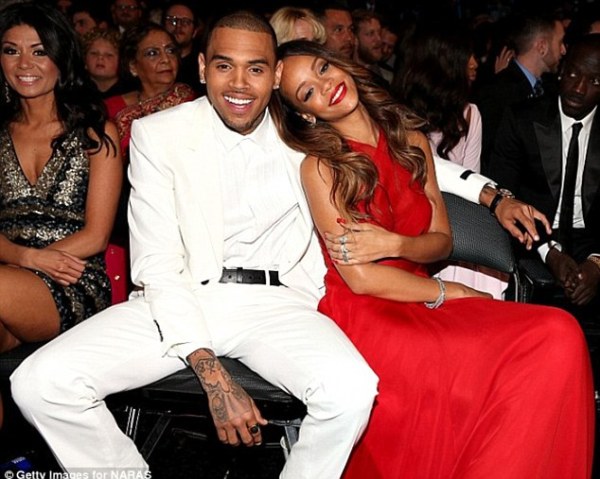 Speaking toThe Sun, Clinton revealed that he thinks the pair are too similar to maintain a steady relationship, and their union could end in tragedy.

Clinton also hinted that in his opinion, the 2009 row that led to Rihanna being beaten by Chris wasn’t one sided.   He said: ‘One has to assume because they are back together that it wasn’t one-sided.

‘You just have to imagine that it was a circumstance in which they both had a disagreement.’ 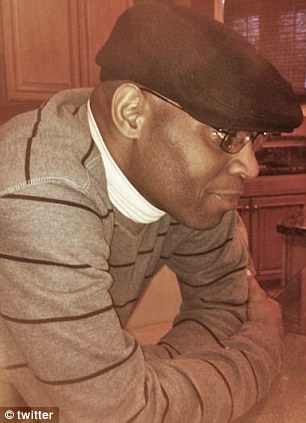 However, the fact that the incident, or more accurately the photograph of Rihanna’s bruised and bleeding face after it happened, is still very much at the front of people’s minds.

Clinton, 48, acknowledges this and thinks that the intense public scrutiny that follows the couple’s every move will also make it hard for their love to thrive.   In his opinion, so too will their similar natures. As far as he is concerned, it might be fun to go out with someone edgy and sexy, but a match between a spontaneous person and a logical one is the true recipe for a long long-term, stable partnership.   He revealed to the paper that he wishes Chris would date a different singer.

‘I personally liked Jordin Sparks. She’s a wholesome young lady, very pretty. Of course, a lot of the times we don’t want the nice, conservative types.’

Prison officer Clinton also revealed that he was fond of Chris’ other girlfriend, Karrueche Tran, who he was reportedly dating at the same time as RiRi.

He claims that Chris and Karrueche got on ‘terrifically’, which is a wild contrast to the rocky relationship between his son and his current girlfriend who often break up and make up on Twitter, play what seem like complex mind games with one another and generally share a passionate relationship.

On paper, Karrueche is a much better prospective daughter-in-law. The petite model doesn’t boast about sadomasochism, smoke drugs, dress in next to nothing or generally behave in a provocative manner. 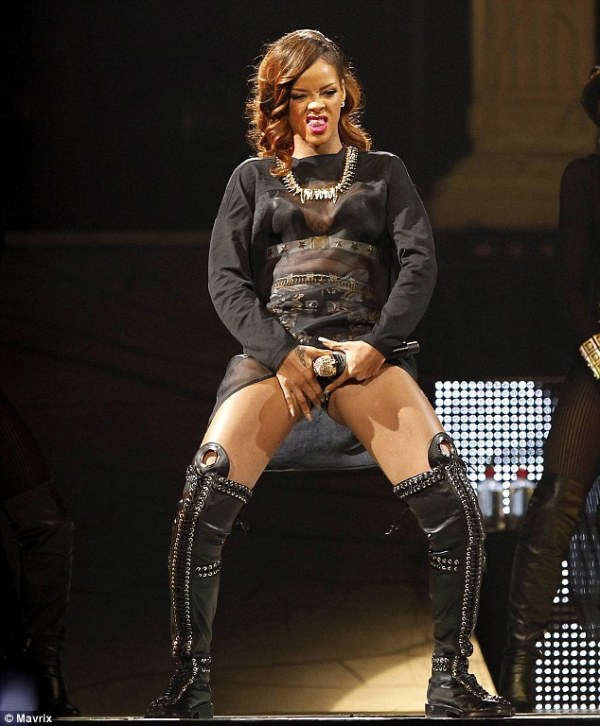 Last year Clinton spoke to Star Magazine when rumours first circulated that Rihanna and Chris were getting close again – despite the courts slapping a restraining order on him when he was charged with assaulting his singer girlfriend..

He told the magazine: ‘I am always concerned about him… He can make his own decisions. But, as a concerned parent, I would rather they not have any involvement.’

Worried Clinton admitted that he sometimes looks at previous high profile tragedies and hopes the same fate does not befall his son.

He name checks Whitney Houston, Michael Jackson and Amy Winehouse as famous artists who have gone too soon. He also claims that Chris is now surrounded by a network of ‘yes men’ and that this too could lead him along the road to ruin.

Thankfully, Clinton says that as he is not on the payroll, he can still dish out good advice as and when needed.

One father whose praise for controversial Chris is Rihanna’s father Ronald Fenty, who is all for their reunion.   He told Grazia magazine last July: ‘Chris has matured a lot. I think everybody has to put the past behind them. And they seem to have done that.’.

Chris claims that seeing his mother Joyce Hawkins suffer at the hands of his violent step-father made him even more ashamed of his actions. Joyce and Rihanna are thought to get on well, and Joyce even tweeted that she and Rihanna speak on the phone daily.

Representatives for both Rihanna and Chris Brown have been contacted for comment!

Justin Bieber was two hours late for his opening night at London’s 02 Arene , Forcing hundreds of parents to leave with their children on Monday night before the singer even came on stage.
The 19 year old has been slammed on Twitter for his disgusting behavior which saw hundreds of decicated
Bieber fans walk out of the arena heartbroken , despite waiting hours for his arrival. 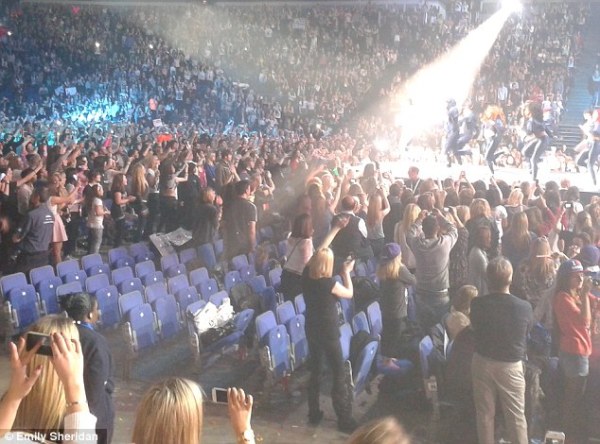 Thousands descended on the 02 arene to see the opening night of the sell-out show with many fans being
under 16 but Justin did not appear on stage until 10.30pm just 25 mintutes before Justin was due to finish. 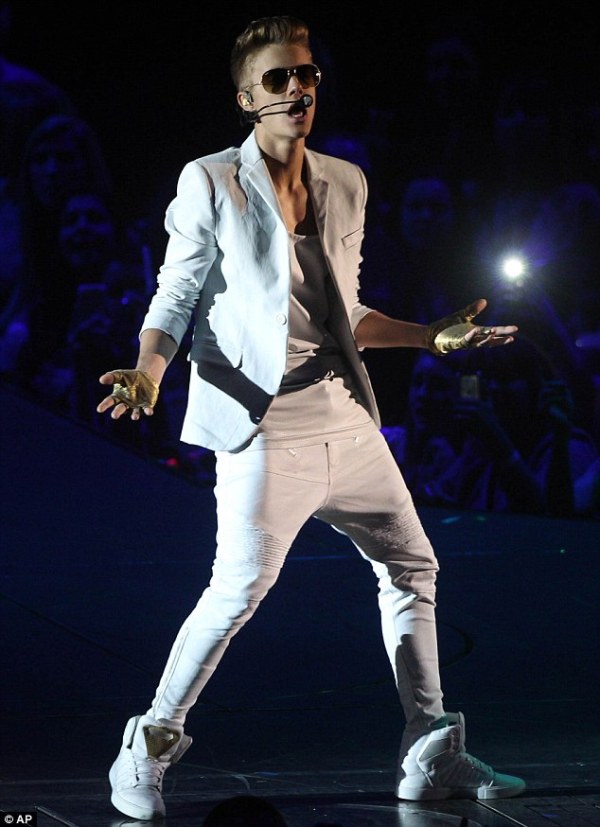 Following the opening act Carly Rae’s set , Fans were left to wait listening to Michael Jackson hits for around 45 minutes until Justin finally appeared on stage at 10.35pm 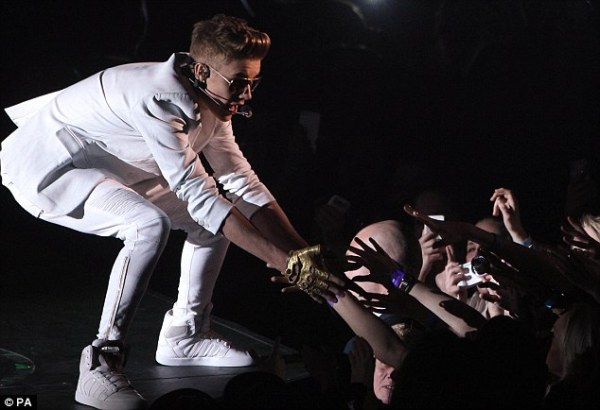