She was forced to cancel three concerts earlier this week after being struck down with an undisclosed illness.   However, Rihanna showed she was back to her usual self as she stepped out in a signature skimpy outfit as she boarded a flight in Los Angeles on Friday.   The Barbadian singer, 25, looked like she was back to health as she boarded a private plane to Tampa, Florida ahead of her gig that night. 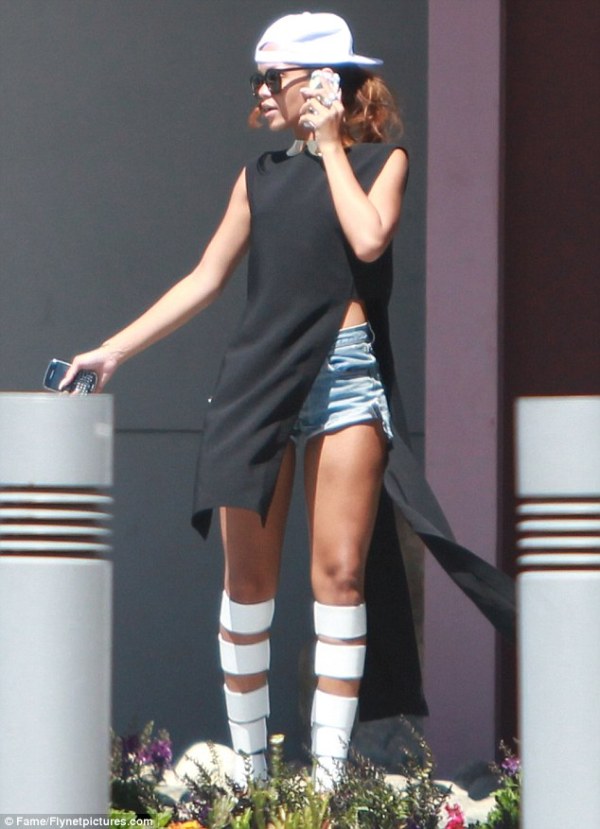 Although looking undeniably thin, she wore a pair of denim short shorts, black top with side slits and a pair of £1,107 Alexander Wang Martha cut-out leather boots.   Ahead of takeoff, she tweeted: ‘#DIAMONDSWORLDTOUR I’m back!!! #Tampa we’re coming to find you!!!’   She also posted an Intagram photo of her wearing her distinctive white sandals in the cockpit of her private plane, captioning it: ‘Just me and my cockpit.’

Her Tampa concert went off without a hitch, with British reality TV star Jessica Wright in the audience.   The Only Way Is Essex star tweeted: ‘My love has grown even more for @rihanna since tonight’s show in Tampa! Love her!!!! Bed now shattered wicked night.’   Earlier this week, Rihanna cancelled two gigs in Houston, Texas, which followed on from previous cancellations in Baltimore and Boston last month.

She then returned home to Los Angeles, where she was photographed visiting a medical centre on Tuesday.

Writing on Instagram last week, the singer said: ”I was sick since San Diego! I kept working because I thought two days off after the Vegas show would be enough time to recover and I f****ed up, those were two days off from hell and today is not different!   ‘I’m sad and disappointed about it! I had all kinds of plans for Houston!’

Concert promoter Live Nation added that the cancellation was ‘as a result of illness’, although declined to reveal the exact nature of said sickness.   However, many fans have been speculating about the nature of Rihanna’s illness, as the singer has been seen partying in between her tour stops.   Rihanna has regularly posted shots of her antics on her Twitter and Instagram pages – most recently of which showed her and a group of friends celebrating the singer’s friend Melissa Forde’s birthday on the bus en route to San Diego.